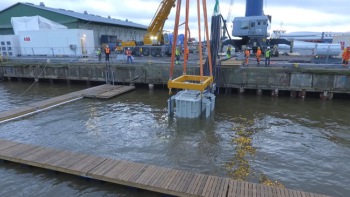 Siemens and ABB have nearly finished testing on subsea power distribution stations, including an underwater transformer.

These stations would allow for the transmission of electricity from above-water generators to underwater equipment using only a single cable. Currently, operators must string multiple power lines from power plants or diesel generators aboard nearby rigs to every piece of underwater equipment they install. The new technology from ABB and Siemens would help improve efficiency by streamlining the process.

“Our technology is an enabling technology for the subsea factory,” says Bjørn Rasch, head of subsea power for Siemens.

Siemens’s model, which the company calls its Subsea Power Grid, consists of a transformer, a medium-voltage switchgear, and a variable-speed drive. Its distribution voltage is around 30 kilovolts, while its variable-speed drive puts out 6.6 kV. The system can provide electricity to devices with power ratings between 1 and 15 megawatts. The umbilical that hooks it to a generation station also includes an embedded fiber-optic cable so operators can run everything from afar.

One of the hardest parts of building the station, Rasch says, was ensuring it could withstand the high water pressure of the sea floor. Instead of encasing all the equipment in a pressurized chamber, engineers flooded the electronics with a synthetic fluid called Midel. This biodegradable fluid inside the equipment maintains the same pressure as the seawater, which alleviates stress. The fluid also passively cools the device by transferring heat from equipment to the chilly seawater.

“We’re getting close to where we’re actually deploying this technology in a real project,” Rasch says.

Siemens performed a shallow-water test for its system in November 2018 while ABB expects to complete the final round of testing in June for its subsea variable speed drive.

Both systems are expected to work at depths of up to 3,000 meters and operate for 30 years with minimal maintenance. At the end of their lives, the units can be removed from the sea floor.