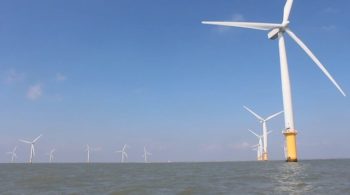 The concept envisages a direct connection from the wind turbines via 66 kV connecting cables to the offshore converter platform of the transmission system operator TenneT.

The grid operator TenneT has agreed with the energy companies EnBW and Ørsted, respectively, that they will not connect the selected future offshore wind projects in the North Sea with 155 kV cables, but instead the wind turbines of the offshore wind farms with 66 kV connecting cables directly to the offshore converter platform.

As a result, the construction of offshore substations (OSS) by the wind farm constructor can be avoided or reduced to the lower requirement of an offshore service platform (OSP). In addition, the export cable for the network operator is omitted.

Volker Malmen, Managing Director of Ørsted in Germany said: “Offshore wind power is still a young industry in Germany, but due to Ørsted’s many years of experience, we have been able to significantly advance the cost-effectiveness of offshore wind energy within just a few years. The cost reduction and innovation potential for our industry to be very high.”

Tim Meyerjürgens, Managing Director of TenneT, said: “This transmission concept leads to an enormous cost reduction in the wind farms and for the grid connection. With the 66 kV direct connection, we have developed a new generation of cost-efficient offshore grid connections for the German North Sea, which will make an important contribution to the energy transition. ”