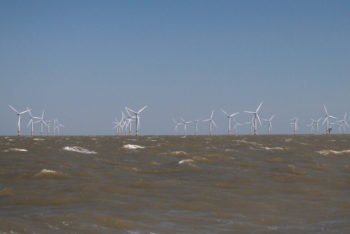 Iberdrola has connected the East Anglia One offshore wind farm to the British grid.

The wind farm, built in the North Sea, about 50km off the coast of the English county of Suffolk, is scheduled for commissioning next year.

The first of its 102 wind turbines, called WTG E19, has already supplied wind power to the ground substation located in the town of Burstall. Its subsidiary Scottish Power Renewables, which has already installed 25 wind turbines at the site throughout this summer, will gradually connect them to the network.

Cvering an area of 300 square km, East Anglia One is one of the most relevant wind energy projects under development in Iberdrola and the largest renewable initiative ever promoted by a Spanish company.

When it enters into operation in 2020, the wind power plant will be the largest in the world, with an installed capacity of 714 megawatts (MW), which will supply 630,000 British homes with wind energy.

The construction of East Anglia One is boosting the offshore wind energy industry in Europe, employing more than 1,300 people in several countries – Spain, the United Kingdom, the Netherlands, the United Arab Emirates – and being key to several sectors, such as the naval.