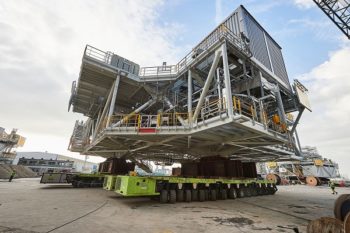 The third and final Siemens Energy Offshore Transformer Module (OTM) has been completed and is ready to sail to the Moray East offshore windfarm project.

An OTM is the substation platform out at sea and in a world’s first, three of these will be connected with the capacity to deliver 950MW clean energy from the Moray East project.

The OTMs will sit on three-legged jackets and each weigh-in at around 1,100 tonnes. Each module will transmit the power generated by the 100 turbines across the 295km2 site, back to shore and into the national grid where it will be distributed to homes and businesses.

The OTM, which is significantly smaller in size and weight compared to conventional alternating current offshore wind platforms, will transform the output voltage of the wind turbines from 66 kV to the transmission to shore voltage of 220 kV. Additionally, the power transformers are filled with synthetic ester, rather than traditional oil, meaning they are fire resistant.

Mark Pilling, Head of Transmission Solutions, Siemens Energy UK&I said: “This is a significant milestone in the project to bring low cost, low carbon power to homes and businesses across Scotland. Using a modular approach means we have been able to optimise the platforms to the specific needs of the customer and the area being developed, ultimately saving time and cost for the developer. Achieving this milestone is a testament to the hard work of the team who have delivered these components with zero snags to the customer, which is an incredible achievement.”

Marcel Sunier, Project Director for Moray Offshore Windfarm (East) Ltd said: “This latest major milestone in the delivery of Moray East is a reminder that the step-change in the transition to low-cost, low-carbon power is enabled by scale and by world-leading innovations.  Those innovations include the use of three OTMs, whose modular construction itself marked a major advancement in offshore transmission technology.