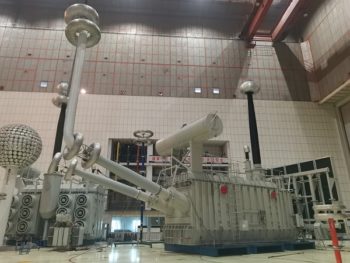 The technical team of Tianwei Baobian (Qinhuangdao) Transformer Co. has completed the assembly of the first high-end converter transformer for the Qingnan UHV converter station

The converter, the first one among the high-end converters of Qingnan UHV transfer station, is a key component of the DC power transmission project, and together with the converter valve, it forms the “heart” of the transfer station. its main function is to transfer 750 kV of power to the power station.

The large transformer was transported over 3 days using special transport vehicles, namely a bridged transport truck coming in with a total length of 98.5 meters, a width of 5.2, a height of 5 meters, and a total of 276 wheels.

Source and image courtesy of: BTW