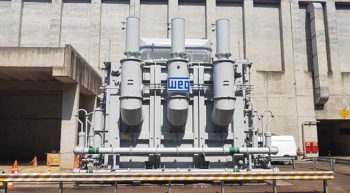 Brazillian engineering firm WEG has performed repairs, as well as a retrofitting service, on a number of transformers at the Governador José Richa Hydroelectric Plant.

In addition to the repair of the three-phase elevator transformer, the service also involved the study, supply and installation of 12 high voltage bushings, on four machines from the same plant.

The performance of the service ensured greater operational security for Copel (Companhia Paranaense de Energia) and also for its users. The Governador José Richa Hydroelectric Plant, also known as the Salto Caxias power plant, located in the city of Capitão Leônidas Marques – PR, where the service was performed, is one of Copel’s most important, with 1,240 MW of power.

WEG competed with other important players, including the original manufacturer.  Because of this large peice of equipment, with high voltage insulated with SF6 gas, the main differential in this supply was the ability of WEG to quickly develop a manufacturer alternative for such a high voltage bushings that met both technically and commercially, thus enabling the process of reforming the transformer.

Also included was the complete overhaul of the transformer, including complete rewinding, new high voltage outputs, studies and improvements in the cooling system, structural improvements in the tank and the main cover, alteration of the pressing system of the active part and supply of a new breech to the core.

Source and image courtesy of: WEG