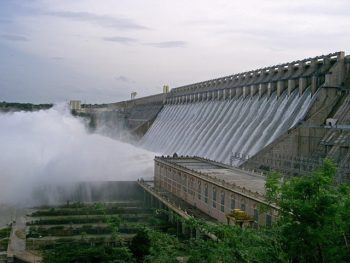 A fire at the Nagarjuna Sagar Hydel Power Plant in Telangana, India was brought under control before it could damage a transformer being repaired.

A supply wire of a transformer in the fourth turbine caught fire, but alert staff swung into action and brought the fire under control, averting a major accident. After the incident, TSGENCO Director (Hydel) Ch Venkata Rajam inspected the plant and enquired about the incident.

Rajam said the eighth turbine would be made operational by February after completing the repairs, adding that the works were delayed as there was a problem in finding experts who could work in deep waters.

Describing the NSP incident as minor, he said it should not be compared with that of the hydel plant in Srisailam last year. “The Srisailam fire accident affected power generation. But here, we are trying to overcome it by generating additional power by utilising the water released from the Nagarjuna Sagar Project,” he said, adding that demand for power would be high during the Yasangi season.