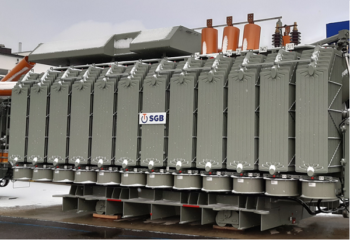 NYTRO® BIO 300X has now been fully tested and approved by Starkstrom- Gerätebau GmbH in Regensburg (Headquarter of SGB-SMIT Group), fulfilling, and even exceeding the requirements of the transformer operator, the German utility Westnetz.

The 80 MVA ONAF 115/21 kV transformer manufactured in Regensburg successfully passed the complete sequence of factory acceptance tests. This means all routine and type tests, including lightning impulse and induced over-voltage withstand test, were carried out and the transformer successfully performed in all aspects.

SGB-SMIT Group and Nynas recognize that with the introduction of NYTRO® BIO 300X a unique combination between performance and sustainability is possible. In this specific transformer design, which was based on GTL insulating fluids, NYTRO® BIO 300X was used, after performing several verifications, without requiring any special adaptation.

“NYTRO BIO 300X is the result of years of intensive research. We are now able to offer a 100% renewable product with superior performance. It is a true innovation,” says Koen Kempeneer, Global Market Manager Electrical Industry at Nynas.