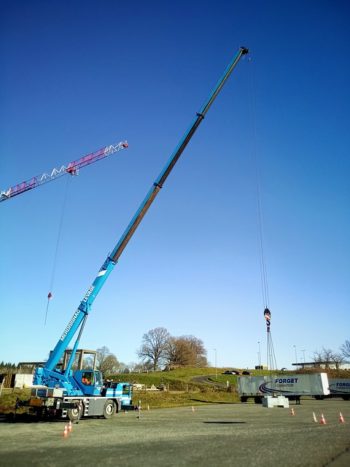 A new 55-ton power transformer has been installed at a wastewater plant in Brookfield, Missouri.

The new 55-ton transformer is the first of two to be installed and comes as part of Amaren Missouri’s Smart Energy Plan to increase the reliability of the city’s grid.

The two new transformers are to replace the four older substations and were constructed by Hitachi ABB in Mississippi. Costing $17.1 million, both new transformers should be in operation in four months.

The need for an upgrade was made apparent when an outage several years ago left business without electricity all day.

“The outage took so long to repair because we had to get a new transformer up her from Jefferson City”, said Steve Underwood of Amaren’s Substation Design Team.

“It was a long outage, but it would have been worse had it been a weekend or overnight when crews had to be called in.”

The new system is set up so that the second transformer restores power in around three seconds in the event of the first one failing. Crews installed the 55-ton transformer with the help of a crane.