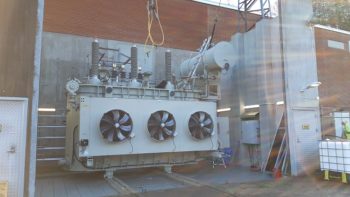 The city’s utility company Göteborg Energi opted to use the bio-based and biodegradable insulating liquid in a transformer located in a sensitive water protection area.

“As the transformer is located near a source of drinking water, we needed to make absolutely sure that no oil is spilled in the area, and we needed to use an insulating liquid that is highly biodegradable,” says Ferruccio Vuinovich, Planning Engineer, Göteborg Energi.

Göteborg Energi decided to test the performance of NYTRO® BIO 300X by using it in one of three identical 40 MVA transformers installed in Gothenburg.

“This enabled us to evaluate and confirm some of the features promoted by Nynas,” Ferruccio Vuinovich says.

“The low viscosity, even at low temperature, made it very easy to handle. It was almost like filling the transformer with water,” he says.

“We have been able to achieve around 10 degrees lower temperatures in the transformer, improving the performance without the risk of overloads. It also opens the potential of using smaller transformers in certain locations. This is something we might look into in the future,” says Ferruccio Vuinovich.