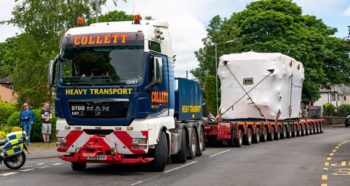 The Collett Team has delivered a 128-tonne transformer from Esprit Warehousing & Docks, Salford to the National Grid substation in Rochdale.

Preparation for the delivery of the 7.6m (L) x 4.0m (W) x 3.9m (H) transformer began in March 2021 with the initial feasibility of the movement being immediately assessed.

Undertaking route surveys and swept path analysis reports, Collett’s Consulting Department stated various street furniture that would need removing / replacing. This included requesting a Temporary Traffic Regulation Order (TTRO) along Clay Lane which led up to the substation. In addition, road widening works at the site were completed using aluminium trackway panels to enable the trailer to make the sweep into the site.

Pulled by a MAN 8×4 tractor unit, the Power Boost System prevented the need for a second ballast tractor unit and gave the ability to drop the prime mover off altogether and turn the trailer into a Self-Propelled Transporter (SPT). Furthermore, utilising the SPT significantly lowered the overall train weight of the load for site access limitations later on in the journey.

All movements were facilitated by Greater Manchester Police and Transport for Greater Manchester, ensuring prior warning and protection of all other road users, limiting the road-traffic congestion and ensuring extensive public safety.

Source and image courtesy of Collett