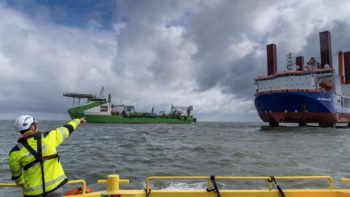 North of the Maasvlakte, TenneT is developing the Hollandse Kust (zuid) offshore grid for the connection of new wind farms. Four offshore cables will be buried in the North Sea bed. For the first ten kilometres of the offshore cable route, these cables will be sunk 5.5 metres into the seabed to cross the busy Rotterdam “Maasmond”.

The first two cables were installed in September 2020 and now the remaining cables will follow. The underwater robot ‘Deep Dig-It’ has successfully crossed the Rotterdam Maasmond with the third cable and is now on its way to the recently installed Beta jacket in the Hollandse Kust (zuid) wind area.

The Van Oord – Hellenic Cables consortium is installing the two cables to the Beta platform. The interlinking cable, which connects the two offshore platforms, was already successfully installed at the Alpha and Beta jackets. The preparatory work was completed during the past few days.

The cable that will be installed to the Beta jacket has been pulled ashore through the jackets to the newly built onshore transformer station on the Maasvlakte. Now, the consortium combination will lay the cable with a total length of 34 kilometres to the wind area Hollandse Kust (zuid). Van Oord developed the Deep Dig-It, a gigantic, remote-controlled underwater trencher, especially for this project.

Source and image courtesy of TenneT