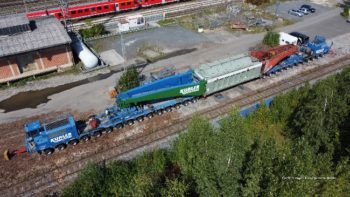 The Kübler haulage company, which specialises in such transports, will bring the four more boilers in the coming weeks. They will first be transported by rail from the manufacturer Siemens Energy and its plant in Weiz, Austria, to the port of Linz. From there they will be transported by barge to the port of Nuremberg and then by rail to the Lichtenfels freight station. By road transport, the last section leads via Hochstadt am Main, Altenkunststadt, Weismain and finally past Stadelhofen via the A70 to the transformer station.

The total weight of the transport is 567 tonnes. In order to drive safely on the roads, the total weight is distributed over a total of 27 axles. This gives the transports a total length of 56.3 metres. All transports will last two days and will be parked in the Modschiedel district of Weismain during the day. The first transport is scheduled to reach the Würgau substation during the night of 15 September. The other transports are currently planned for the last two weeks of September and the first week of October.

TenneT has already been preparing the Würgau substation for two years for these transformers, which are the largest in the German TenneT grid to date. The plant, whose previous modernisation was only completed in October 2015 with a large open day, will thus become the Bavarian hub for green electricity. In total, TenneT has invested a further 70 million euros in the Upper Franconian plant, thus laying an additional foundation for the success of the energy turnaround in Franconia, Bavaria and ultimately also for the safe domestic north-south transport of electricity from renewable sources.