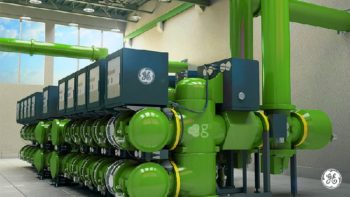 The GIS is to be installed at the Vattenfall Eldistribution AB Lindhov substation in Tumba, located approximately 25 km from the center of Stockholm.

The switchgear will feature GE’s industry-leading g3 (pronounced “g”- cubed) gas, a game-changing alternative to SF6 – a potent greenhouse gas – with a global warming potential (GWP) that is about 99% less compared to SF61.

“This contract represents GE’s latest g3 switchgear award and demonstrates that utility operators are becoming increasingly aware of their environmental footprint and the impact it has on their communities and the world around them.  Today, 25 leading electrical utilities have already adopted GE’s g3 gas products for their high voltage networks, avoiding the addition of more than a million tons of CO₂ equivalent to the grid. That’s the equivalent of removing about half a million petrol cars from the road for one year,” said Mikael Grage, Managing Director – Sweden at GE’s Grid Solutions.