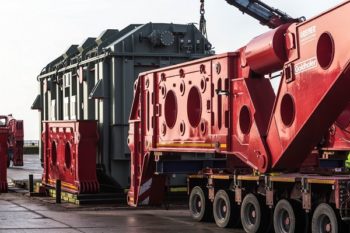 A 350-ton transformer has been delivered to the Oststeinbek substation in Schleswig-Holstein via a heavy transport vehicle.

The 75-metre-long heavy transport started its journey in Lauenburg. Its destination: the Oststeinbek transformer station, 47 kilometres away. After seven nights of driving it arrived. Due to the size and its maximum speed of five kilometres per hour, the heavy transport vehicle was only able to travel at night.

The transport, which weighs around 700 tonnes in total, wasn’t driven by a person but was in fact remote-controlled. Among other things, traffic lights and traffic signs had to be dismantled along the route.

The heavy transport could almost have reached its destination on Monday, but the last corner was once again a big challenge. “We parked it today for the time being. We are about to make the last turn. That would have been a regular stop anyway,” a spokesperson for the transport company said on Monday afternoon.

The transport vehicle had to be modified before it could continue. “We drive with two times 24 axles. We take six axles out of each so we can get the last curve. It’s pretty tight. We can’t get around there otherwise.”

The first transformer has now arrived at the Oststeinbek substation. However, the special transport vehicle will return to Lauenburg as three more 350-tonne transformers are waiting for their 47-kilometre transport to the substation.