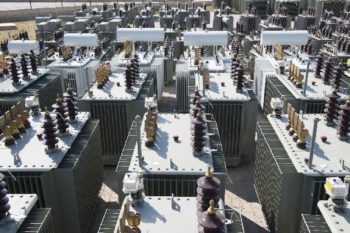 With recent regulatory initiatives, the EU is making a strong commitment to improving both energy and material efficiency. The sustainable peak load concept for public distribution transformers does exactly that. Is it time for its widespread application in the field?

The ambition set out in the European ‘Fit for 55%’ package (July 2021) requires that all technically and economically feasible avenues to decarbonisation be rolled out rigorously. Maximizing the energy performance of electrical distribution networks is one of these avenues. At the same time, the European Green Deal expressed the ambition of making the economy more material efficient, resulting in a new Circular Economy Action Plan (March 2020).

In the area of electrical energy, there is an inherent conflict between these twin ambitions, since a key measure for improving the energy efficiency of electrical systems is increasing the amount of conductor material. Making smart use of electrical systems can in some cases mitigate this trade-off. The sustainable peak load concept deployed in distribution transformers represents such a smart solution. It does not change the transformers themselves, but instead maximizes their output for material efficiency without compromising their energy performance.

At the origin of the concept lies the fact that many public distribution transformers, as currently rated, are underexploited. This has historical antecedents. Stringent rules on loss reduction, compactness, and absence of toxic substances have prompted various technological innovations, including the use of highly conductive winding material, magnetic steel with reduced losses, thermally upgraded paper, and natural esters as liquid insulation.

As a result, many transformers can now withstand higher temperatures in the windings, and consequently higher peak demand, without compromising unit reliability or lifetime. This potential is not usually exploited in order that losses are kept below the postulated value.

Public distribution networks typically have such low load levels. Until recently, their loadings have been estimated only, not measured. With the introduction of smart meters, extensive measurement campaigns have now recorded full-year kWh data, which show that loadings tend to be lower than initially thought. The average load factors tend to be around 15% of nameplate capacity.

A group of experts, under the European Copper Institute’s direction, conducted a modelling exercise to assess the impact of selecting sustainable peak load units for all transformer replacements in public distribution networks in the EU, with the following findings:

A major economic advantage of the sustainable peak load transformer is its compactness. With the transition away from fossil fuels, substantial growth in electricity consumption is expected in some sectors supplied by distribution networks. The sustainable peak load transformer provides the opportunity to upgrade transformer peak power while keeping the same unit dimensions. This is a critical aspect in urban environments with space restrictions, and allows savings on installation costs. Consequently, transformer upgrades might be made at an earlier stage, making the distribution grid more robust.