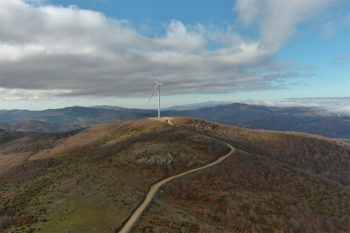 Iberdrola has commissioned the 33.6 MW Mikronoros wind farm in Greece.

With the entry into service of this facility, located in the province of Rodopi, the company brings its total installed wind power capacity in the country to 308 MW. The plant, which has eight 105-metre-high wind turbines and a rotor diameter of 150 metres, will be capable of supplying clean energy to more than 34,000 homes.

Hitachi was responsible for the electromechanical assembly at the Patriarchis substation, owned by the Greek transmission grid operator (IPTO), which has been completely renovated with a new gas insulation system (GIS) on the outside.

In this way, expansion of the substation area and earthworks have been avoided by using the existing vacant land, which has significantly reduced the environmental impact of the construction.

In addition, during the implementation of the project, the communications system in the area has been reinforced by means of fibre optics and the installation of new equipment in the adjacent substations, owned by IPTO, which has served to improve the Greek transmission network.

The Iberdrola group is currently building three more new wind farms in Greece, which will be added to the 20 sites it already operates in the country. These are the Askio II and III facilities (88 MW) in Kozani, and Rokani (18 MW) in Viotia.

The Iberdrola group’s pioneering commitment to a sustainable growth strategy based on promoting the electrification of the economy through investment in renewable energies, electricity grids and energy storage has enabled it to become a global energy leader and the first in its sector in Europe by capitalisation, with a stock market value of around 70 billion euros.