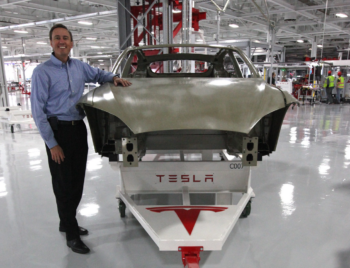 Since the official opening of the factory on March 22, geolocation data has shown a slow but steady ramp-up of activity level. When compared to other more established automobile plants or to activity levels during the construction phase, factory performance is still at a low level.

German industrial intelligence provider Fygen.com has observed a two-fold increase in factory activity levels over the past 10 weeks, since the official factory opening on March 22, 2022.

However, the numbers are still below the level observed during the busiest phase of the plant construction at the beginning of March, 2022.

Additionally, the total number of the workforce on site, measured remotely and based on geolocation data, is still only a small amount compared to others such as other Tesla Gigas or their competitors like Mercedes-Benz and Volkswagen. Detailed numbers are available upon request.

Currently, Tesla aims to hire about 500-600 people per month for its Giga Berlin, teslarati.com reports.

Fygen.com declares that, despite aiming to deliver the most accurate and reliable data, it cannot be excluded that observations in the data might be caused or influenced by other external factors, and hence any inaccuracy.

Fygen.com is the world’s leading data provider for factory observation. It helps its clients monitor the utilization rates and activity levels of potentially more than 3 million industrial sites globally.