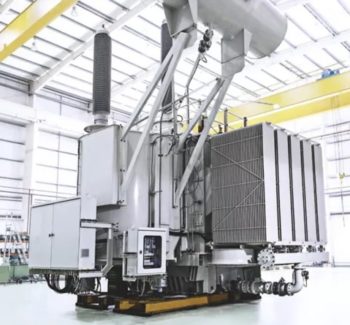 Hitachi Energy’s transformer factory in Córdoba has commemorated its 90th anniversary, following a two year impasse due to the pandemic, with the vision of continuing to generate sustainable solutions that transform the world.

The Cordoba transformer factory is one of the most long-lived plants in the world and has produced more than 3,000 transformers with the latest technologies and innovations. It is singular in one aspect, its capability to design and manufacture two transformer technologies, Trafostar (Hitachi Energy core type technology) and shell type.

Cordoba can produce up to 50 transformer units per year, which means an energy production capacity of 15,000 MVA. Its transformers can reach a voltage range of 765 kV, with a power range of 1,100 MVA 3ph – 750 MVA 1ph. An 70-80% of the production is supporting different customers around the world. In countries like the United States, Canada, Mexico, Saudi Arabia, France, United Kingdom, Bangladesh, Algeria and Vietnam, in addition to those in Spain.

As part of a very ambitious plan, investments are being made at the Córdoba factory to adapt its facilities to the new market needs, Industry 4.0 and the sustainability and development objectives of the 2030 agenda.

In addition, it is a centre of excellence for shell technology, holding one of the group’s technology and R&D centres, as well as being an operational base for multiple global positions in the Transformer business.

The factory is already working on the development of the next generation transformers, which will boost and develop important synergies in the city and its business.

To celebrate its 90th anniversary, the Cordoba factory organized an open day for employees, their families and authorities, to show the factory, explain the products manufactured and step forward in advancing the internal culture after two years of social distancing.

The event was attended by more than 1,400 people, including the Mayor of Cordoba and the Government Delegate of the Andalusian Regional Government, among other local authorities and relatives of employees, who had the opportunity to learn more about the latest technology transformers produced at the Cordoba factory.