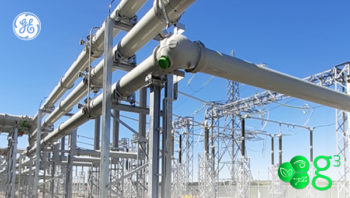 GE has released gas-insulated lines compatible with both SF₆ and their more environmentally friendly replacement g³.

Thanks to their high transmission capacities and reliability, gas-insulated lines and busbars (GIL and GIB, respectively), have been in use for over half a century in power plants and in high voltage substations.

Until now, it seemed difficult to replace SF₆ in existing lines without a drastic adaptation of the GIL. That’s why GE has optimized its GIL design so that it can be used with SF₆ as well as with its g³ insulating and switching gas which has a 99% reduced carbon impact compared to SF₆.

GE’s dual gas GIL has been optimized to work with SF₆ as well as with g³ with the same performance. That’s why it is easy to replace the SF₆ gas by g³ with a simple adaptation kit comprising filling valves, molecular sieves and the g³ gas. If the gas monitoring system is a conventional one, it will need to be replaced by a digital one such as GE’s BWatch.

Due to the optimization of the GIL design, the amount of gas (SF₆ or g³) in the GIL is reduced by at least 15% compared with the previous version.