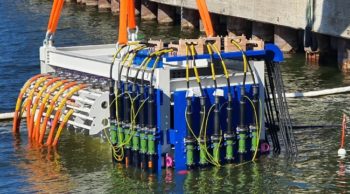 Hitachi Energy has begun testing on the world’s most powerful 24-MVA subsea transformer, which will be supplied to OneSubsea®, the subsea technologies, production, and processing systems business of Schlumberger.

The tests will involve submerging the 55-tonne subsea transformer into the harbour basin to monitor its thermal behaviour and pressure compensation system, as well as ensure its reliability in subsea conditions.

Hitachi Energy has collaborated closely with ABB on the project. ABB is supplying its INSUBSEA® Long Step-out solution to deliver power to the OneSubsea® compressors and has overall system responsibility for the power scope of the project.

The OneSubsea compression system will be powered and controlled from the Nyhamna onshore gas processing plant, which is 120 km from the subsea location. This power stepout distance sets a world record for transmitting variable frequency power from an onshore facility to equipment on the seabed. The system will lower backpressure on the reservoir, helping increase recovery and extend the life of the field.

“We are delighted to be collaborating with ABB and OneSubsea on this important project,” said Bruno Melles, Head of the Transformer Business at Hitachi Energy. “A subsea transformer is an advanced technology due to its ability to operate in waters at a depth of up to 3,000 m and in extremely demanding conditions, including high pressure, corrosion, subzero temperatures, and strong underwater currents. Hitachi Energy´s OceaniQ subsea transformer technology is also ideally suited for the connection of floating offshore wind farms to the grid. This feature is another example of our company’s ability to develop state-of-the-art power systems that meet the highest quality standards.”

”Hitachi Energy is a key partner for ABB on this ground-breaking subsea project. Together our long offshore industry experience and power distribution expertise make for an unbeatable solution. We are proud to be contributing to life extension and boosting efficiency at Ormen Lange,” said Gunnar Lie, Head of Operations, Subsea and New Energy, Energy Industries at ABB Norway.