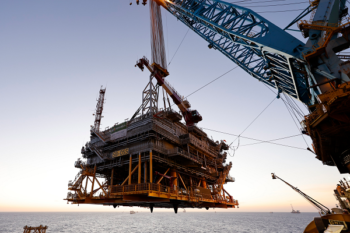 Iberdrola has successfully completed the offshore installation of the substation for the Saint-Brieuc offshore wind farm in Brittany, France.

Weighing some 3,400 tonnes, this substation will be responsible for collecting all the electricity produced by the plant’s 62 wind turbines, estimated at 1,820 GWh/year. The output is enough to supply the needs of 835,000 homes, including heating, and avoid the emission of almost 200,000 tonnes of CO2 per year into the atmosphere.

To transfer the electricity generated to land, the company will install 90 kilometres of submarine cable, almost three times the length usually required for an onshore wind farm. All cables between wind turbines will be buried to ensure safe navigation and the maintenance of fishing activities within the wind farm.

This electricity distribution infrastructure was built in Belgium by a joint venture comprising Smulders (a subsidiary of Eiffage Metal) and Equans. The former has carried out the engineering and construction of both the foundations and the substation that houses the transformers and other electrical equipment – supplied by GE Renewable Energy Grid Solutions -, while the latter has carried out its assembly and will be responsible for its commissioning.

The structure supporting this substation consists of a 63-metre-high jacket foundation weighing 1,630 tonnes. The substation is 55 metres long, 31 metres wide and 23 metres high, with a total weight of approximately 3,400 tonnes.

Both elements arrived in the park area at the end of June from the Belgian shipyards of Equans in Hoboken and Heerema Fabrication Group in Vlissingen, where the substation and the foundation have been manufactured, respectively.

According to Emmanuel Rollin, head of Iberdrola’s offshore business in France, when this facility comes on line, “the department of Côtes d’Armor, led by the Saint-Brieuc offshore wind farm, will be the leading contributor of renewable energy in Brittany, producing the equivalent of 9% of the region’s total electricity consumption”.