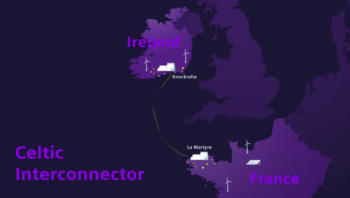 Siemens Energy has announced it will deliver the high-voltage direct current (HVDC) transmission technology for the Celtic Interconnector, an electricity highway between France and Ireland.

It will be the first connection between the Irish grid and Continental Europe, according to Siemens Energy. The project will strengthen the security of electricity supply in both countries and facilitate the integration of renewable energy sources into the European electricity grid. The order value for Siemens Energy is in the mid three-digit million-euro range. The interconnector is jointly developed by EirGrid, the electricity transmission system operator in Ireland, and its French counterpart, RTE.

Celtic Interconnector has a total length of 575 kilometers, of which 500 kilometers of cables will run through the Celtic Sea. Over such long distances, electricity can only be economically transported in the form of direct current. Siemens Energy is therefore building two converter stations at the end points of the interconnector – one near Knockraha, located in the County Cork region of Ireland, the other one near La Martyre in France. Both can convert alternating current, as fed into the stations from the respective national grid, into direct current for transportation, and vice versa. In this way, the converter stations enable the bidirectional exchange of up to 700 megawatts of electricity. This
corresponds to the supply of around 450,000 households.